“No Bridge, No Project”?

“No Bridge, No Project” is something we’ve heard a lot over the last several years. Similar to the “Joliet can’t take it” slogan that was pushed hard during the fight in Elwood, this one too may soon be proven wrong.

The “No Bridge, No Project” slogan refers to the bridge in Elwood being the lynchpin to the entire NorthPoint proposal. That without this bridge at Walter Strawn Drive, the whole thing falls apart and NorthPoint goes away. It’s naive to think that a billion-dollar project hinges upon one bridge in one location.  Let’s not underestimate the enemy or make false assumptions about what’s going through their heads… they didn’t grow to be one of the largest logistics developers in the country by being stupid.

As reported in the Joliet Herald-News:

NorthPoint Development has acquired land that may make it possible for the developer to build the bridge it needs for the future Compass Global Logistics Hub.

Land in the area of Route 53 and Breen has recently been acquired by NorthPoint. This land is outside of Elwood and would be annexed into Joliet. It has the potential to connect the northern tip of NorthPoint’s footprint to Millsdale Rd, which gets NorthPoint’s closed loop into the rail yards within CenterPoint. This “second” or alternate bridge location kills the idea that defeating a bridge in Elwood would defeat the project.

NorthPoint’s preferred bridge location is at Walter Strawn Drive because it is a “loophole” in a 2016 MOU (Houbolt Project Memorandum of Understanding) that restricts truck traffic to certain roads in/out of CenterPoint. CenterPoint and NorthPoint are competitors in this industry but CenterPoint cannot keep NorthPoint out of the rail yard.  So if NorthPoint wants to bring 10,000 trucks per day through CenterPoint, it’s certain that CenterPoint would rather have them come in/out via Millsdale Rd where a financial arrangement for this traffic would be necessary, as opposed to Walter Strawn Dr, where no such MOU obligation exists.  EDIT:  We now know that a new road called Compass Parkway leading to a new bridge over the railroad at Millsdale Rd would avoid the MOU obligation entirely by keeping their truck traffic off Millsdale.

… The new agreement covers an additional 400 acres of land in the vicinity of Route 53 and Breen Road that NorthPoint is adding to the project and could make it possible for the developer to build two bridges, Regis said. …

Another 400 acres in addition to the 1360 acres as part of the original Joliet proposal, plus ~200 acres already in Elwood, plus the 1280 acres within Manhattan’s planning area brings the total project size to 3,240 acres; or just over 5 square miles.  (original 2900 acres shown below)  EDIT:  We now know the latest proposal adds 936 acres, bringing the total footprint to something just under 4,000 acres, or 6 square miles.

This fight is far from over and we are never giving up! Please contribute to our GoFundMe to support the legal efforts! 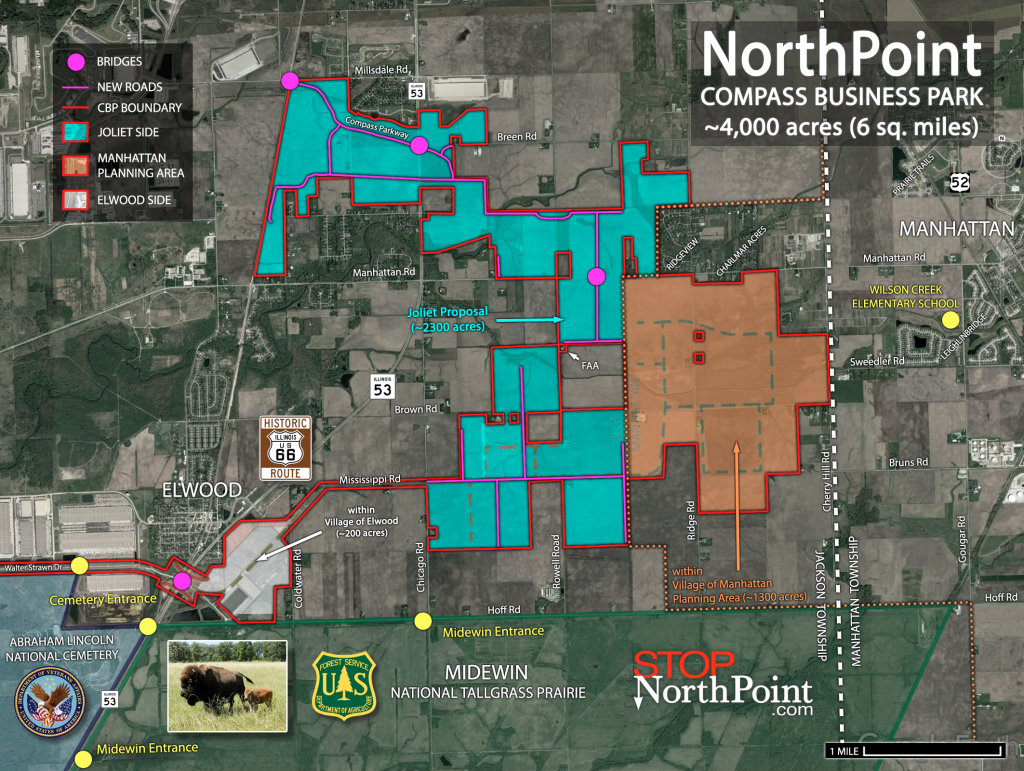