Highly decorated veterans and their families among 35 plaintiffs in lawsuit against Joliet.

Veteran heroes, including a foundation named for a Medal of Honor recipient, along with Silver Star, Bronze Star, Purple Heart, and World War II veterans and their families have joined a new fight to protect the Abraham Lincoln National Cemetery against Mayor Bob O’Dekirk and Joliet’s intent to build warehouses all around the cemetery. 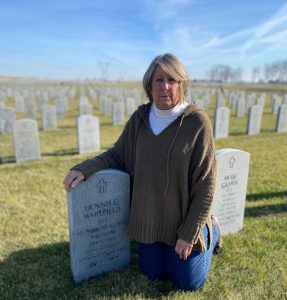 “No American would countenance the building of an industrial park next to Arlington National Cemetery,” said Medal of Honor recipient Allen Lynch, the only living Medal of Honor recipient in Illinois. “This is no different. We have joined this suit via the Allen Lynch Medal of Honor Foundation because we have one, singular constituency: our living and fallen comrades. We consider this final resting place as sacred, inviolable and worthy of our efforts to mitigate it being defiled as it has been. It doesn’t matter if it’s Arlington or Abraham Lincoln, they are the same.”

Last April, the Joliet City Council passed a vote to pre-approve the building of a trucking warehouse park five times the size of Midway Airport adjacent to Abraham Lincoln National Cemetery and Midewin National Tallgrass Prairie where a bison herd roams. On Tuesday, Joliet City Council is expected to vote on final approval of the monstrous industrial park despite numerous lawsuits from Stop NorthPoint LLC, neighboring Village of Elwood, Sierra Club and Openlands.

Stop NorthPoint LLC is an all-volunteer grassroots group of Will County residents organized specifically with the intent of securing a permanent halt to NorthPoint’s trucking warehouses in a court of law. The legal fund is crowd-funded with the average contributor $75 to $125.

“Stop NorthPoint’s complaint asks a court to consider the health, welfare and safety of the residents of Joliet and surrounding region,” said civil rights powerhouse attorney Bob Fioretti. Fioretti and his team of attorneys and consultants represent Stop NorthPoint LLC. A more than 200-page complaint was filed in Will County Court in October.

The Lynch Foundation was originally formed to provide funding to needy veterans and their families in order to assist in their recovery from financial hardships. The board, which includes many notable veterans and others, unanimously voted to join Stop NorthPoint’s lawsuit.

“Our military, regardless of branch, accepts a bond will all brothers and sisters on the first day of service,” continued Lynch. “When we say we leave no many behind, it’s not a slogan, nor does it ever expire. We–and the cities of Joliet and Elwood — owe them this accommodation.”

Here is a Facebook link to the video taken today of a semi truck turning around within the national cemetery, blocking the funeral procession from exiting the cemetery.

With 35 plaintiffs in total, these are veteran heroes:

Stop NorthPoint LLC is an all-volunteer grassroots group organized exclusively to raise funds for the legal fund with every intent of prevailing. Stop NorthPoint’s average contributor ranges about $75-$125. Contributions can be made electronically at StopNorthPoint.com, or at any BMO Harris Bank.