Mayor, Councilmen Gives the Back of Hand to Residents

Mayor, Councilmen Gives the Back of Hand to Residents

[Joliet] — Instead of listening to phoned-in public hearing testimony Tuesday that was underway concerning the controversial NorthPoint project, Joliet Mayor Bob O’Dekirk, Council Members Herb Lande and Larry Hug, as well as City Manager Jim Hock, all left the council chambers frequently and for extended periods of time, some chatting in the hallway with NorthPoint representatives, according videos, photos and witness testimony.

A nearly two-minute video shows newly appointed Lande (whose construction company likely stands to benefit from the development) talking with NorthPoint representative Tom George — all while Openlands Attorney Stacy Meyers was presenting during the public hearing held Tuesday during the Joliet City Council meeting. Although Meyers could be heard on the video because her testimony was played through a speaker in the hallway, the two men were obviously focused on their conversation and ignoring Meyers, the video shows.

“The new councilman [Lande] was in the hallway talking to NorthPoint when he was supposed to be sitting down and listening,” said Alejandro Gutierrez, a veteran from Elwood who was in line to voice opposition but was turned away when the meeting was postponed at 9:24 pm.

All of the residents who spoke at Joliet’s prior planning and zoning meetings earlier this month opposed the project, including hours of testomony. Many complained that Joliet was simply not listening to its residents and neighbors.

One video showed a media photographer stepping around Lande and George. O’Dekirk is seen not wearing a mask, potentially endangering the health of attendees and council members.

“When Lande noticed me, he talked louder on purpose so I could hear him say ‘well, I just wanted to get enough information to make the right decision,’ which is ironic since he was completely ignoring the public hearing testimony in progress,” Kieken said.

About half the people who witnessed this are not affiliated with Stop NorthPoint, including veterans and residents of Joliet. Stop NorthPoint LLC, a grassroots organization that filed a lawsuit seeking a permanent halt to the project.

Among the witnesses waiting in line to speak was Brian Giaretta, a business owner and Captain in the US Marine Corps Reserves, after serving 15 years infantry with combat deployments. He is a candidate for Manhattan mayor who opposes NorthPoint.

“I was disappointed and disheartened to witness the constant and continual disrespect toward the brave citizens giving their testimony—some of them being the very people that voted these officials into office,” Giaretta said. “As a leader, I couldn’t believe my eyes.”

Openlands, an environmentalist nonprofit, has filed lawsuit with Sierra Club against Joliet to stop the NorthPoint development. She presented for about twenty minutes Tuesday night.

People watching from home Tuesday on Joliet’s YouTube channel saw on the screen Meyers’ PowerPoint presentation, allowing the mayor and council members to leave the room without being noticed by viewers. When she was finished and her PowerPoint was taken down, viewers saw Lande, the mayor and Hug return to their seats.

Photo Caption: Joliet City Councilman Herb Lande (left) and Joliet City Manager Jim Hock speak in the hallway instead of listening to public comment testimony in chambers. This photo was taken at 8:49 pm. 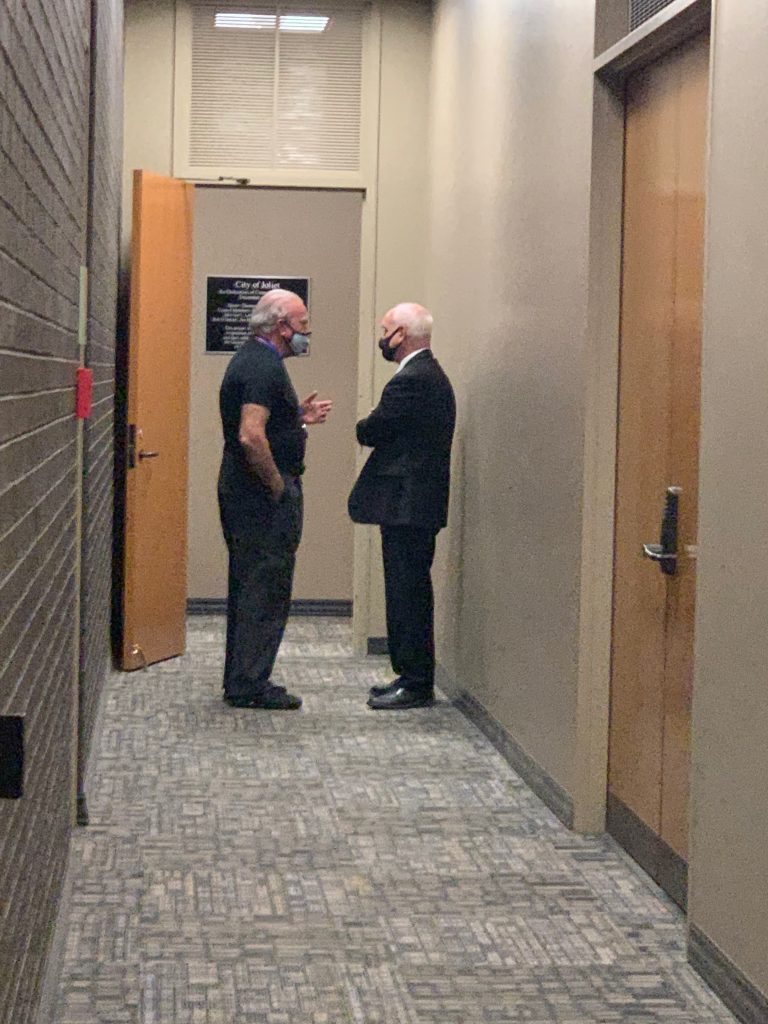 Photo Caption: Joliet Councilmen Herbe Lande and NorthPoint representative Tom George speak in the hallway or several minutes instead of listening to public comment testimony in chambers. This is a screenshot of a nearly two-minute video taken at 8:59 pm. 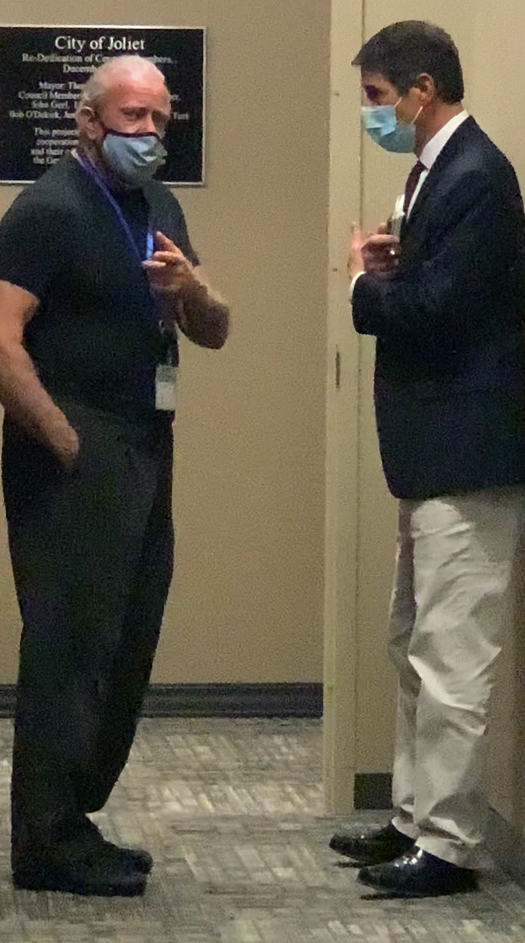 Photo Caption: Joliet Councilmen Larry Hug (standing to right of police officer) and Herbe Lande (third from left with arm raised) speak in the hallway instead of listening to public comment testimony in chambers. This is a screenshot of a video taken at 8:53 pm.

The video is available here:  https://youtu.be/sY_UqiN06VY 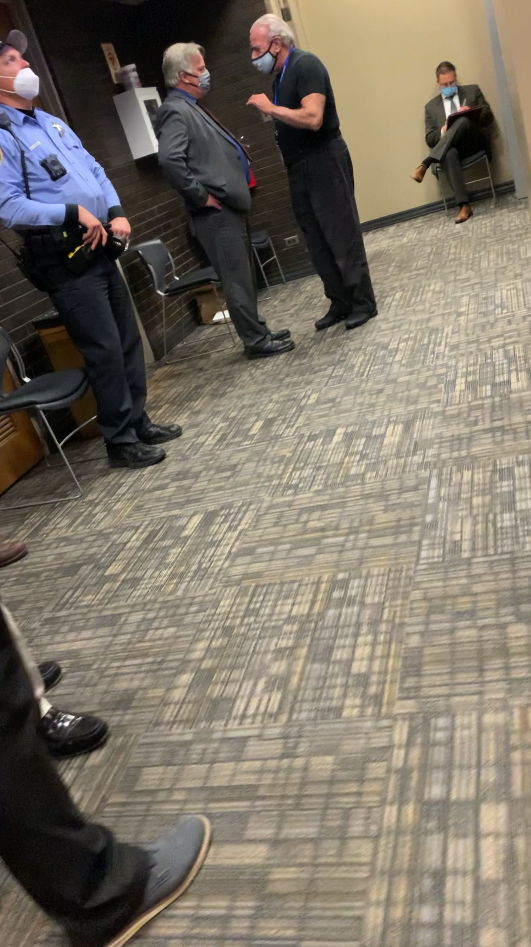 i got an email from the Patch (one of those automated
susbscription ones) that touted “new neighbor discussions” and the highlighted listed 1 that was titled “should we place bets on how bad that blonde woman from just say no to northpoint is going to react on tuesday at the joliet council meeting? and it was linked to that question which is FLAT OUT encouraging people to bully and harrass Erin? thats pretty low even for a trash page like the patch.