On Monday, Stop NorthPoint’s legal team was denied standing to speak as an “interested party” at the Joliet City Council hearing on December 21, 2021.

“For the purposes of the public hearing, an interested party shall be defined as someone who either owns property within 600 feet of the proposed development site, or a member or official representative of an affected governmental body; the remainder of those who wish to be heard shall be classified as public speakers.
Stop Northpoint does not meet the definition of interested party.”

The Stop NorthPoint lawsuit has at least one Plaintiff who lives within 600 feet of the proposed site, therefore this particular individual is being denied their right to have standing while being represented by their attorneys at this hearing.

The “obsolete” April 2020 draft traffic study obtained last week was 180 pages.  This December 2021 draft is only 29 pages and yet the new proposal in front of Joliet City Council this time is 75% larger.  The NorthPoint proposal gets larger while its studies stay in draft mode and shrink down to practically nothing.

This draft covers only 536 acres, which is less than 25% of the total acreage in front of Joliet City Council and less than 15% of the total proposed project, which is approximately 4,000 acres. Kimley-Horn refers to this as the “initial phase” of the proposed NorthPoint project.  Is Joliet City Council really going to vote on this county-altering project next week without completed traffic and environmental impact studies?

As per this draft report, 17,000 vehicles per day are presently using Rt 53 near Millsdale Rd., and this 536-acre “initial phase” is expected to generate 4,980 cars and 930 trucks per day.  Remember, this is only 4.2 million square feet. The total NorthPoint project, which is expected to be 40 million square feet, would bring 10 times the amount of traffic discussed in this draft.  Ignoring the trucks, can IL Route 53 handle a QUADRUPLING of automobiles – 50,000 additional cars on top of the existing 17,000 per day?

They repeatedly state that all truck traffic must enter via a “driveway” at the Union Pacific railroad crossing on Millsdale Rd., while the second access point on IL Route 53 will be restricted to automobiles. Kimley-Horn says “stricter enforcement [of Millsdale] may be necessary to ensure trucks do not utilize this route.”  Exactly how much will this additional traffic and police enforcement cost the City of Joliet taxpayers? 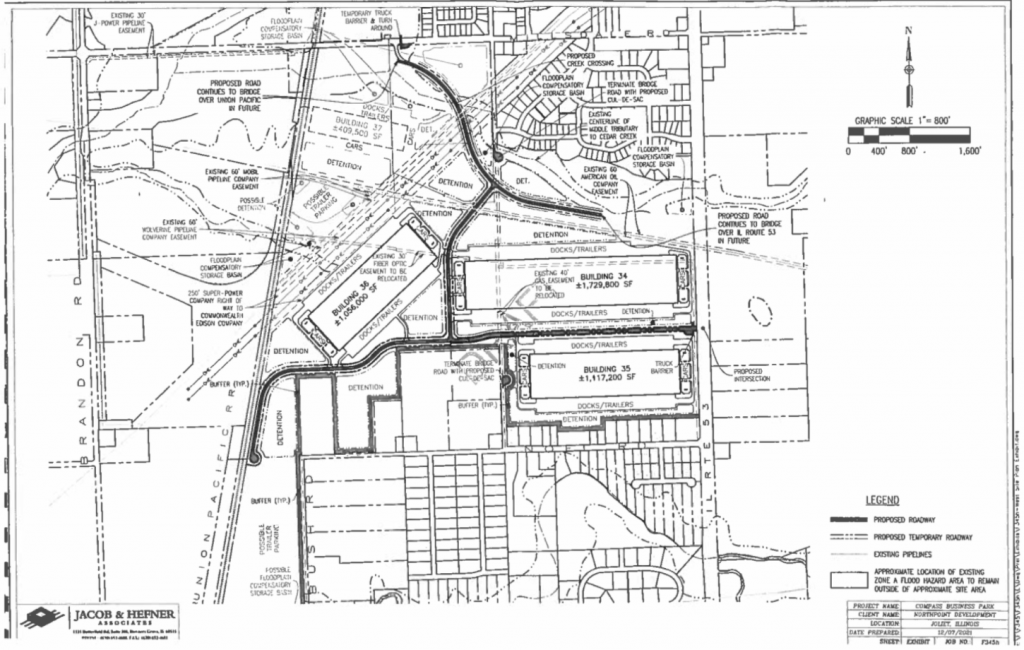 CS: Okay, so there’s no traffic impact study reflecting the current proposal in the hands of the City of Joliet right now?

CS: Okay, and will it [Traffic Impact Study] be there before we meet in December twenty-first?

Sjogren: I’m not sure. We’re working with the City and the County on the scope of the study to be done.

CS: You’re not sure if it’s going to be ready for when they vote?

Only a month ago, with the City Council hearings scheduled for December 21st, they were still working on the scope for the Traffic Impact Study “to be done”.  Based on what’s been turned over so far, it doesn’t appear as if any studies will be complete in time for next week’s hearings and vote.

The next court hearing will be in front of Judge Pavich in Will County on December 15th at 10:30 AM.

Chris Regis, Attorney for the City of Joliet, turned over some documents to the Plaintiff’s attorneys December 9th. Regis claims that Joliet does not have any other traffic studies other than a 2020 draft traffic study provided to Plaintiff’s attorneys that he called “obsolete” and no environmental impact studies. Yet, Joliet’s City Council plans to proceed with hearings on December 21st and vote on approving this massive project with or without environmental or traffic studies.

With more than 10,000 additional semi-trucks daily, the question is not whether there will be an impact on the environment, but rather what impact it will have.

Kathy Sons, attorney representing NorthPoint, appeared for the hearing and informed the court that she intends to file a petition for leave to intervene in the case.

Joliet plans to vote on the newly expanded NorthPoint boondoggle at the City Council Hearing on December 21 at 6:30 PM.  Attendance at this hearing is critical.